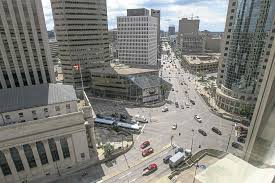 Murders are at an all time high.  Assaults, robberies and theft are rampant.  Our streets are more unsafe than in recent memory.  Retailers are being robbed daily.  Homeowners are having their personal property vandalised and stolen.  In the minds of many their homes are no longer a place of security.

The problem is, even if enough people got together and demanded action who do we direct such a demand to?  Our Mayor and City Councillors who are responsible for the oversight of policing in Winnipeg?  The Police Board or the Police Service?  Or should we go straight to the Chief of Police?

The 2015-2019 Winnipeg Police Service Strategic Plan outlined four goals and objectives for that time period.  The Police Service’s mission statement is, “Build safe and healthy communities across Winnipeg through excellence in law enforcement and leadership in crime prevention through social development”.  The specific goals are stated as, “less crime and victimization, engaged communities, effective and efficient service and a healthy organization”.

The goals sound laudable enough but when the entire approach is predicated on the flawed strategy of “crime prevention through social development”, the chances of success are limited.  One has only to  look at what is happening on our streets and to look at the crime statistics.  The goals are not being achieved.  The crime rate is rising, calls for service are increasing, and response times are suffering.

Our Mayor seems totally preoccupied with the budget — limiting the size of any tax increase and cutting services is the order of the day.  Nobody wants to pay higher taxes but by the same token nobody (except the criminals) wants to see a continuation of the lawlessness we see on our streets, in our stores and even in private homes.  The Mayor and the Police Service seem to be in lockstep doing the crime prevention through social development and addressing root causes two step.  Its not working and the public is getting tired of hearing the same music and watching our leaders dance the same dance.

The time is right for our leaders to dig deep and reassess how Winnipeg is policed, and how it should be policed.   The recently announced study being conducted in conjunction with Harvard University is a step in the right direction.  Our police officers have become so entangled performing tasks that fall outside the scope of policing that there is limited time to concentrate on their primary mission.   We need to decide what we want our police to do.

Back in 1974 when the eight municipal police departments were amalgamated into the Winnipeg Police Department (as it was then known), every officer was issued with a set of regulations that governed the police and outlined what their function was.  It outlined the primary objectives of the Police Department as: “The safety of the lives and property of citizens, The preservation of peace and good order, The prevention of crime, The detection of offenders, The enforcement of the laws”.

We need our police officers to get back to the basics:  keeping citizens and their property safe, preserving peace and order, preventing crime, arresting offenders and enforcing the law.

This part will look at the formulation of goals, strategies, tactics, and performance  measures.

Although performing a meaningful environmental scan, and establishing a vision, mission and core values may seem daunting, the next steps are even more daunting. The formulation of goals, objectives, strategies and performance measures require the organization to put it ‘on the line’.  They are required to stipulate what their goals are, outline their strategy(s), list their objectives and most importantly, indicate how goal achievement will be measured.  Then, having said what they are going to do, they have to do what they said and report on their progress.   It is this aspect of strategic planning that leads to taking responsibility and ultimately being accountable not for outputs (activities) but rather outcomes (results).  Measurement of outcomes truly brings to bear Sir Robert Peel’s Ninth Principle which states:

To recognize always that the test of police efficiency is the absence of crime and disorder, and not the visible evidence of police action in dealing with them.

Goals, Strategies, Objectives and Tactics – linking the present to the future.

Goals are directly related to the vision and express what an organization is attempting to achieve, the new state of being compared to the present state.  In policing terms, if a particular city is experiencing high rates of crime in particular communities or its downtown area a reasonable goal (dependent on the vision) might be ‘a safe downtown’ or in the case of other communities, ‘communities where residents feel safe’.  By intent, goals are broad in nature and like vision statements should not eliminate options in terms of how the goal will be achieved.

Objectives describe what must be done in order to achieve goals.  In terms of the previous example regarding downtown safety one objective might be ‘to reduce violent crime in the downtown area by a specific percentage within a given time frame’.   Because the term safety is such a broad term, a stated goal of ‘a safe downtown’ might require a number of objectives, each addressing a different aspect of safety.   Other objectives might be ‘to reduce incidents of drunk and disorderly behaviour and panhandling by a specific percentage’ and  ‘to reduce thefts from vehicles by a given percentage’.  All these objectives, if achieved, would contribute to the goal which is  making the downtown safer for businesses, residents and visitors alike.

Strategy is a term with military origins.  The early writings by Niccolo Machiavelli (The Prince) and Sun Tzu (The Art of War) clearly indicate that the concept of strategy, that is, a strategic approach  toward goal achievement, is not a new idea.  It was, however, only in the last century that businesses started seriously looking at using strategy as an effective business tool.  As mentioned in a previous post it was not until the advent of New Public Management that strategic thinking and strategic planning became accepted in the public sector.

Strategies are approaches or means that will be used to achieve objectives.  Going back to the downtown safety example, there are many different strategies that could be applied to the situation.  One strategy might be to simply do more of the same.  So if the police department was currently deploying foot patrol in the downtown area one strategy might be to deploy more foot patrols, ie if ten are good then 20 must be better.   An increase in numbers might be an effective strategy to address one aspect of the downtown safety issue,  ie drunk and disorderly conduct.  Other aspects of the safety issue such as break-ins to cars might be better addressed by another strategy such as the use of closed circuit television.  This means that a number of different strategies might be selected to address different aspects of the safety issue.

What is Performance Measurement

Lastly, there is the  thorny issue of accountability and  performance measurement.  Most policing organizations report to a civilian oversight body such as a Police Board or a Police Commission.  Boards and commissions work with police to determine what the goals should be and serve as the accountability watch dog that police report to in terms of goal achievement.  Winnipeg is different.  It is one of the few cities, if not the only city, in North America where the Chief of Police reports to the Chief Administrative Officer of the city, and the police department has a reporting relationship to a standing committee of council (Committee of Protection Parks and Culture) and not a commission or board.  In the Winnipeg example this committee has never truly embraced its oversight function leaving the police somewhat  adrift in terms of accountability.

The last word on performance measurement and accountability is this:  make sure you are measuring results (outcomes), not activities (outputs).  The purpose of a strategic plan is to achieve results, not itemize the busy work the organization plans to engage in.  Plans that stress activities or list activities that will be engaged in without direct links to goals and anticipated outcomes are of little use.

The next post in this series will examine several strategic plans for Canadian police departments.