When I read Bartley Kives’ interview with Mayor Sam Katz in today’s Winnipeg Free Press where Kives asked the mayor about the murders in the north end, two things came to mind: firstly,  the answer does not fit the question, and secondly, in the words of Shakespeare, he  “doth protest too much, methinks”.

It is not unusual for politicians to avoid answering questions put to them by the media.

What is unusual (and curious) is when  politicians offer up information that although not relevant to the question invites all kinds of other questions while revealing  their insecurities and self doubt about the things they are doing.

In his year end interview with the Mayor, Bartley Kives asked the Mayor a simple question:  “ FP: How do you feel about the unsolved triple shooting at the end of October?”

The Mayor’s reply was “ It was not a good day in the City of Winnipeg, I’ll be blunt with you. I assume (the police) are still doing their investigation and will come up with information and hopefully solve it. For all I know, they could have suspects as we speak. But I don’t know, because I don’t interfere with police investigations. I have never done it before and I have no intention of doing it right now.”

When you look at the Crimestat map depicting homicides, shootings, muggings and sexual assaults in a few of Winnipeg’s north end communities, it’s readily obvious that it’s been awhile since those communities have had a “good day in the City of Winnipeg”. 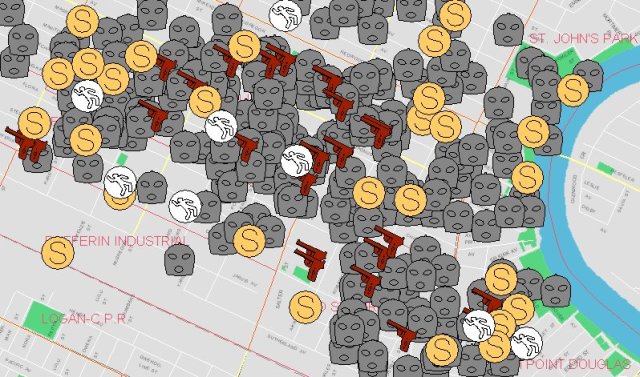 The mayor went on to say “I assume (the police) are still doing their investigation and will come up with information and hopefully solve it. For all I know, they could have suspects as we speak.”

Unless the mayor is not reading the briefing notes he is sent (or dozing off during his weekly briefings with the chief of police), there is no need for him to make any such assumptions on the progress of an ongoing investigation. To suggest he is taking a disinterested ‘hands off approach’ in terms of the progress of this investigation means he is either a fool or he is negligent.  Politicians need to keep themselves informed and abreast of what is happening.  To pretend otherwise is cause for concern.  The mayor can and should be kept informed about the progress in an investigation of this magnitude and it can be accomplished without piercing the ‘sacred veil’ of police operations.

Lastly, the Mayor says:  “But I don’t know, because I don’t interfere with police investigations. I have never done it before and I have no intention of doing it right now.”

Where is this comment coming from?  Where in the interview is it suggested that he has or may be interfering with police investigations? Why the unsolicited denial?  Even the layperson knows that there is a big difference between being briefed and being kept aware of the progress of police investigations, and interfering in them.  Politicians should keep themselves informed, and they must not yield to the temptation to interfere.

The mayor then qualifies his statement further by saying he has never done it (it being, interfering with police investigations) and that he has no intention of doing it right now.  Never is a pretty strong word. All inclusive, leaves little wiggle room, little room for interpretation. Never means never. Not even once.