In my previous post on CPTED I displayed a number of screen shots of communities in the City of Winnipeg that showed very low crime rates.  The communities in question benefited from the application of some basic tenets of CPTED, namely, a natural barrier (the river) surrounding the communities as well as limited points of entry and exit.

Those naturally occurring features might prompt the question: what do you do if there is no river or other natural  barrier?

The fact is, that if addressed during the development and building stages of a community, man-made features can be added to replicate features that naturally occur in other communities.  Not only can the features be replicated, so can the results in terms of a reduction in crime.

The pictures below are of a residential areas within the boundaries of the Brockville community in the south-west area of Winnipeg.  As can be seen in the pictures the community has very limited points of entry and exit (two), and a boundary (a fence) surrounding it.

Brockville is another community, or portion of a community, that shows a very low crime rate.  As a matter of fact, according to Crimestat, of the criminal offences tracked by Crimestat this community had no reported crime between January 1 2015 and December 15 2015.

Border fence along the south edge of the development, facing Sterling Lyon Parkway

The gray area  in the screen shot (below) is a representation of the entire Brockville community.  The pie shaped area outlined in black is the Brockville residential development.  The development itself consists of single storey bungalow style townhouses in the east portion, and multi-story apartment style town houses on the west side.

Although not a high-end gated community, the incorporation of just two aspects of the CPTED design philosophy (limited points of entry and a boundary) can have a dramatic effect on crime rates. 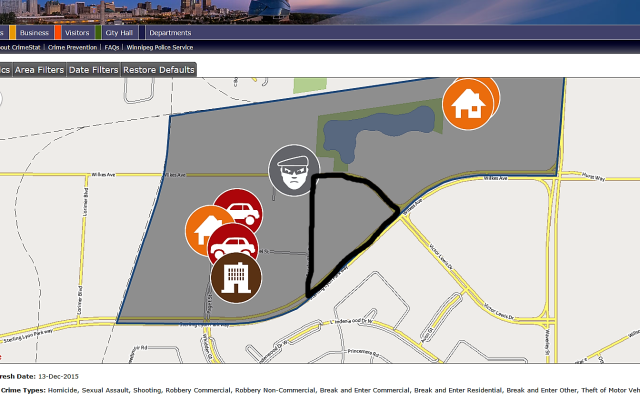 What is  Crime Prevention Through Environmental Design (CPTED)

In a nutshell Crime prevention through environmental design is a multi-disciplinary approach to deterring criminal behavior through environmental design.  CPTED strategies rely upon the ability to influence offender decisions that precede criminal acts.  As opposed to target hardening which makes it more difficult to commit crimes such as break-ins, CPTED attempts to deter criminals from even picking a target in a particular area.  It is premised on the theory that criminals make rational choices and that if the cost (chance of getting caught) are great enough criminals will not commit the crime.

CPTED is a multi-faceted approach but two of the tactics it employs in relation to neighborhoods are:

Couple those two tactics with a barrier around a neighborhood and you have an excellent recipe for crime prevention.

It is theories, based on CPTED principles,  that led developers to come up with the gated community concept.

What follows are  three examples of naturally occurring crime prevention measures, namely a river surrounding  a community with a limited number of entrances and exits and roadways that discourage and in some cases eliminate through traffic that clearly demonstrate that the design of communities has a lot to do with the prevalence or lack of crime.

All the screenshots in this post were taken from the City of Winnipeg Crimestat website and depict reported crime for the offences reported on Crimestat for the period between January 1, 2015 and December 10, 2015.   The screen shots were taken on December 8th, 2015.

This first screen shot shows the Armstrong Point community in downtown Winnipeg which had 3 reported crimes:

This screen shots show the West Broadway Community which is immediately adjacent to Armstrong Point.  West Broadway had 114 reported Crimes.

This shot shows the Wildewood Park Community with 4 reported crimes:

I think the screen shots and the number of crimes they depict make the argument.  If you have a barrier, in this case a natural barrier such as a river surrounding a community with limited points of entry and egress and a lack of through traffic, criminals are deterred from committing crimes in those areas.  This is not a fluke.  I have been tracking these communities for years and the results are the same or very similar year after year.

Some small enclaves in newly developed residential areas such as Waverly West embody limited CPTED principles either consciously or by default.  It is unfortunate that CPTED principles are not applied  across the board in new developments.  Neighbourhoods designed and laid out based on CPTED principles would be a boon to the residents living in those neighbourhoods, as well as the Police Service in terms of a dramatic reduction in crime and the resulting calls for  service.  A crime that is prevented requires no followup or investigation.