The numbers in this post are  based on the 10 crime types tracked by the City of Winnipeg Crimestat program between January 1 2015 and December 31 2015.

* The original version of the post represented crime numbers  up until December 28th 2015.

Attempted theft of motor vehicle is down 10%.

Sexual assaults are down 4%.

Theft of motor vehicle is up 3%.

Non-commercial robberies (muggings) are up 3%.

Break and enter other (stand alone  buildings) are up 10%

Residential break ins are up 19%.

Commercial break ins are up 22%.

Commercial robberies are up 36%.

The area defined as the ‘Downtown’ saw an increase of 6%.  The offences that pushed the numbers up in the downtown area were primarily break and enter other (143%), and residential break ins (32%).

A future post will provide a further breakdown of crime by Electoral Wards, as well as a look at  some specific neighbourhoods.

The statistics in the original post which covered the period from January 1, 2015 to December 28 2015 have been amended to correspond to what currently appears on the Crimestat site which included the last 3 days of 2015.

The changes made are as follows:

February 2012 Crime Statistics for Winnipeg (for crimes tracked by Crimestat)

1.  City wide crime (for crimes tracked by Crimestat) for the first 2 months of the year is down 3%.

2.  The month of February however saw a 4% increase in crime.

4.  Residential break-ins are down but commercial break-in are rising.

5.  Robberies are on the increase (commercial robberies up 250% in February).

6.  Dramatic percentage increase in the number of shootings although the actual numbers are still small.

Caution:  The rise (though modest) in the number of auto thefts is a concern.  After years of declines this is the first reversal I recall.  Steps should be taken to address this. 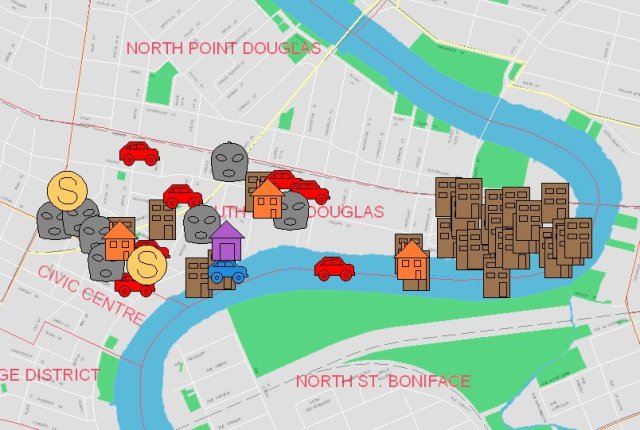 In July of 2009 the Winnipeg Police Service Crimestat site showed a year to date reduction of 18% for the crime categories tracked by Crimestat compared to the same period in 2008.

That number has now slipped to 11%.

As indicated in the original post the overall reduction in crime numbers is driven by a decrease in the number of actual and attempted auto thefts.

When the auto theft numbers were removed from the equation, the July numbers showed an overall increase of 6% in the other crime categories being tracked.  By year end that  number has now doubled to 12%.

This leads to the inevitable question:  why?  Setting aside auto theft and attempts, why are crimes in 6 of the 8 other categories of crime tracked by Crimestat higher in 2009 than in 2008?  Is Crimestat a flawed system? Is it an approach that works in other cities but not in Winnipeg?  Are the tried and true principles first introduced by William Bratton and his team in New York City in the mid -1990’s no longer relevant?

A subsequent post will review the 4 principles that form the basis of the Crimestat approach and attempt to answer these questions and, in particular, the question, Is Crimestat broken?